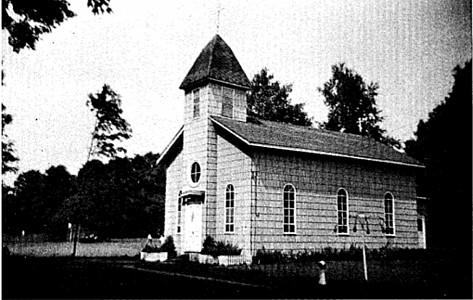 Ss. Peter and Paul Orthodox Church in Crossingville, Pennsylvania, has a history that extends further back than 100 years. In truth, the Orthodox Tradition began in 30 A.D. We remember this yearly in the feastof Pascha, Jesus Christ’s resurrection on the third day after being crucified. Forty days later, we celebrate His Ascension into Heaven; followed 10 days later by Pentecost, His gift of the Holy Spirit to His followers and the founding of the Orthodox Church.

​This is what we carry with us into our 100th anniversary. Of course, there is a personal history as well. We have been able to trace our roots back to Slovakia, in 862, where Ss. Cyril and Methodius were sent as instructors to the Slavic people. This had been a request given to them from Slavic princes, asking that their people be given teachers of the true church to guide them. Although Ss. Cyril and Methodius were both Greek, they willingly obeyed, and they created the alphabet necessary for the Slavs to learn about God and the Orthodox faith.

​Orthodoxy was eventually brought to the northern hemisphere in the 18th century when eight Russian missionaries accompanied fur traders to Alaska. The founders of our church came through Ellis Island in New York with the mass immigration at the turn of the 20th century. They came from the Trans-Carpathian Mountains of Eastern Europe, which includes the present-day countries of Slovakia, the Czech Republic,Southern Poland, and Western Ukraine.

Though America offered a new life and new freedoms, there was still a lot to get used to. Many people left after realizing America was not a utopia; the work was grueling; working in the mines and steel mills and not being able to live in their own homes. For those who did stay, some decided to travel to NorthwestPennsylvania, where they heard the farmlands were rich and the terrain like their homeland.

A group led by cantor Charles Kelyman started having prayer services in homes of the faithful; and in 1921 they received the charter for a church. During this same time, they purchased a two-story corner store in Crossingville, where they held services in the upstairs room. As their community grew, they worked on purchasing property and building a Church.  By 1928, the parish was able to purchase a closed Lutheran Churchin Mosiertown for all the parishioners. But it did not stop there.In fact, the faithful decided to relocate this church building. Crossingville was more centrally located for their community,so they purchased the present lot of land from George McBride in 1929. This property already had an old country house, which was to be used as the parish rectory. By 1930, the grounds in Crossingville had been worked enough for the structure of the church to be disassembled, transported by a team of horsesdriven by 12-year-old John Wasko, and reassembled. This was a huge accomplishment, especially at the beginning of the Great Depression. But as the Lord provides in all things, so He also provided the money and manpower needed to make this happen. In 1931, the whole project was finished. The church was then dedicated to Ss. Peter and Paul and consecrated on July 15, 1937.

​To say that this church has a history is putting it lightly. Each phase this church has lived through has brought us to where we are today. And to see this church still flourishing and making an impact is truly a blessing from the Lord. With our current priest, Fr. Daniel Mathewson, we continue to thrive even more every day. Many updates have been made, from the church building to the church school curriculum, and even to our icon garden! Over the past several years, we have truly taken missions to heart. Whether it be serving the community or donating to a parish family in need, everything we do is understood to be done to God as well. This is the attitude we hope to keep with us in the years to come.

​We look forward to many more years for this parish to thrive as a shining beacon of hope; and we welcome you to, as we commonly like to say, “Come and see”! Indeed, we could write much more about what we are; but there is no better way to learn and understand than to see it with your own eyes.